Hot, Hot Roti at the Holidays 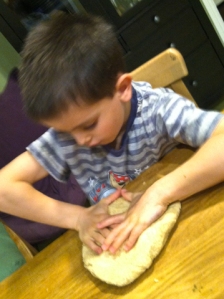 There is a wonderful children’s story called “Hot, Hot Roti for Dada-ji” (F. Zia, 2011) about a young boy that makes fresh roti for his grandfather – roti that bestows superhero powers!  Gwen and Sage discovered the book last year and we have had a blast crafting flatbread ever since. Today after school we decided to make a batch to go with dinner. We have evolved our house recipe a bit – straying from the traditional dough of semolina flour and water. Here is the basic outline:

The touch of masa adds a rich corn flavor that I really love. Mix the dry ingredients with enough warm water to make a medium-soft dough. Knead until smooth, roll into a ball, and let rest in a covered bowl for a half an hour. This will ensure that the moisture is well absorbed in the dough. Tear off a golf ball-sized lump of dough, roll it in your palms a bit, and press it flat on a floured surface. Roll it out with a rolling pin as thin as you can. 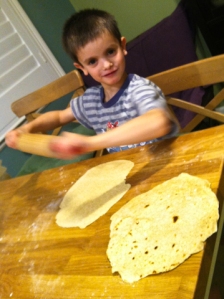 Heat a heavy skillet or griddle or tava pan, but don’t oil it. The pan should be very hot when you begin to cook your roti. Put the flattened dough on the griddle. Within seconds it will be cooked enough to move around. When bubbles form on the top and toasted flecks form on the bottom you can flip it over. Just before the roti is finished we brush its hot surface with butter or ghee and sprinkle on a pinch of Maldon sea salt flakes. Eat them as fast as you can cook them! The recipe should make about 8 for 10. Dada-ji could eat hundreds….

This entry was posted in Family, Food & Cooking. Bookmark the permalink.

1 Response to Hot, Hot Roti at the Holidays